Skip to content
Posted on September 20, 2015September 29, 2015 by logcabinresort
A long journey to your hands!
Much of NASA’s work is focused on Mars and getting humans there as soon as possible. Scientists already have 86 specimens from various parts of Mars which have been delivered to Earth by asteroid impacts to the Martian surface resulting in planetary rock being ejected into space. Eventually, some of that ejected material will enter Earth’s atmosphere as a fireball and any pieces which survive all the way to the ground are collected and sent to laboratories where their origins are confirmed.
How do we know they are from Mars?
Oxygen isotope ratios from the SNC type* (include footnote) meteorites positively match the data collected by the rovers which have been analyzing the surface of Mars since the early 1970’s.
For more information about Martian Meteorites and how scientists know where they come from visit this site: www.imca.cc/mars/martian-meteorites.htm
About our Mars Rocks: 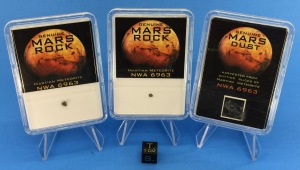 The Nomenclature Committee of the Meteoritical Society first approved the classification of a piece of what they named NWA 6963 in 2011 as a piece of Mars.
The moniker “NWA” stands for Northwest Africa which encompasses meteorites found throughout the Sahara Desert.  The “6963” indicates it was the 6,963rd meteorite officially classified from the “NWA” region.
In 2015, Steve Arnold, world famous meteorite Hunter and host of the award winning TV Series Meteorite Men, purchased a piece of this meteorite. 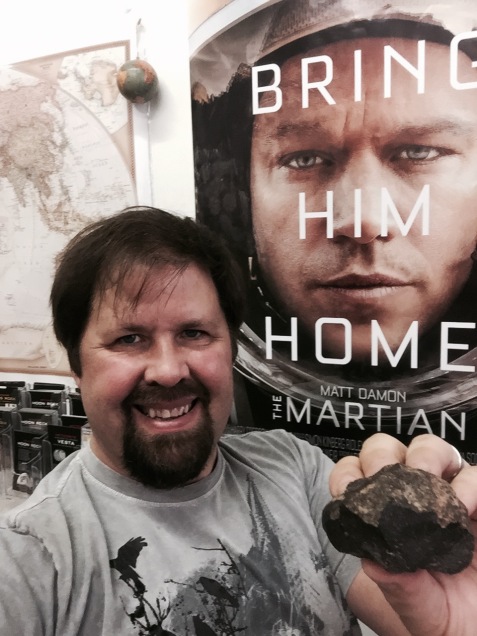 We offer three Mars products:  Large Mars Fragments, Small Mars Fragments and Mars Dust.  Each specimen contains an ID card / Certificate of Authenticity signed by Steve Arnold in or on the protective case to ensure provenance and legitimacy. 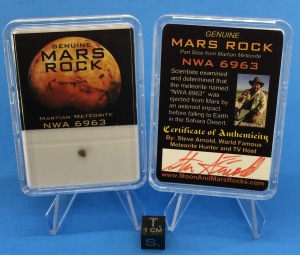 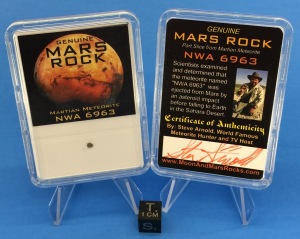 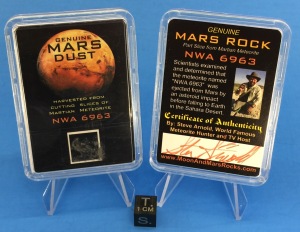 About our Mars Dust:
When cutting Martian Meteorites saw dust is produced.  We carefully harvest this dust and place small dabs of it under clear tape onto beautifully made full color ID cards. These cards are signed by Steve Arnold to ensure provenance and legitimacy.
For more information about Martian Meteorites visit this site: www.imca.cc/mars/martian-meteorites.htm