Skip to content
Posted on September 20, 2015September 28, 2015 by meteoritesteve
About Steve Arnold 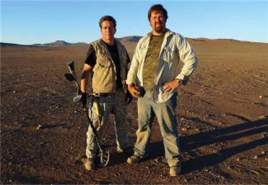 Steve Arnold is the world’s most famous meteorite hunter.  Having been featured in more global media than any other meteorite hunter, most recognized as the host of Discovery/Science Channels’ award winning TV series “Meteorite Men” for three seasons.
In 1992, Steve was researching places to treasure hunt with his metal detector when he ran across an old story from 1890 where a woman had found and sold a meteorite. Steve thought if meteorites were worth money in the 1800’s they were quite possibly worth money today and after an initial bit of good luck decided to hunt for these space rocks for a living.

During his two decade long career, Steve has personally found multiple meteorites on six continents and has sold or traded to institutions and collectors all over the world!
As much as he enjoys hunting for and finding meteorites, his passion is sharing the fun of the hunt on his television shows and sharing the fruits of his labor with researchers, museums and private collectors.
Steve and his wife, Qynne, own and operate the only brick and mortar meteorite store in America, in Eureka Springs, Arkansas.